This is a quick, right to the information tutorial on how you can redact sensitive information from your git repositories.

You'll probably need to do this if you carelessly hard-coded and committed API keys to your repository (Like me!) and are wanting to secure it before making it public.

First of all, ensure all passwords, API Keys, and other data has been removed from your code base and commit the changes.

This is necessary as the tool we'll be using to redact the information from our repository doesn't make changes to the latest commit. This is their explanation for this behaviour:

The BFG treats you like a reformed alcoholic: you’ve made some mistakes in the past, but now you’ve cleaned up your act. Thus the BFG assumes that your latest commit is a good one, with none of the dirty files you want removing from your history still in it. This assumption by the BFG protects your work, and gives you peace of mind knowing that the BFG is only changing your repo history, not meddling with the current files of your project. ~ BFG

Next you'll need to clone your repository with the --mirror flag.

This flag creates a bare repository which means you won't be able to see any of your normal files as it is just a copy of the Git database.

We'll now need to install the tool that'll do all the leg work for us.

The BFG sadly relies on Java, and if like me you don't have java on your environment and have no desire to install it we can rely on Homebrew or Chocolatey depending on your OS.

These two tools are both package managers for Windows and Mac and have a similar syntax for installing software.

If you don't have chocolatey installed you're going to want to run this command in powershell:

If you don't have homebrew install then simply run the following command in the MacOS Terminal:

Once Homebrew is up and running simply type the Homebrew command to install the BFG.

Now all we need to do is write a very short file that will tell the BFG what information to redact.

Create a replacement.txt file in the directory that you cloned.

The file syntax is quite simple and offers four options when redacting information.

For most needs the default option will be fine and you can just write each sensitive string on a new line.

Here's an example of what your replacement.txt file should look like (Relax! Those keys ain't real!): 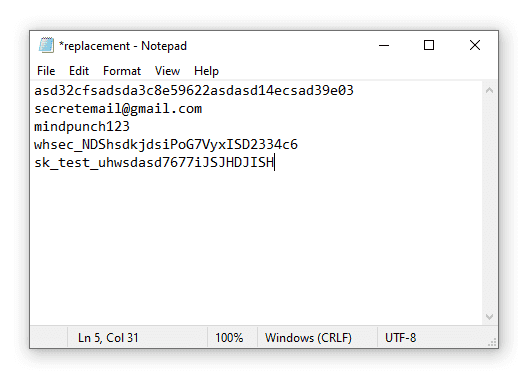 We're all ready to run the command and wipe the sensitive information from the face of the earth... Or at least off the face of your git repository.

If you followed the steps above and ran the command you will have seen the following message:

I think we can all agree, you don't wanna be the guy talking politics at a party...